True luxury is rarely perfect. There is often, as with Bruar, a certain confident scruffiness about it, a slight swagger that relishes the ability to shock the uninitiated. These imperfections are always restricted to the heart of the activity, and never stray beyond. They are almost a challenge if you will- a dare that says: “We are different; this is no easy ride; if you want our experience you must earn it”.

And so it was with Estancia Cortaderas. We were greeted by Omar, our guide and armourer for the week as we exited security at Santa Fe airport. A short slight man, in late 40’s with buzz cut thinning hair. In full camo from head to toe, including cap, it was only the lack of weapons that betrayed him as civilian. Cheerfully and civilly, he greeted then marshalled us, with remarkable alacrity and almost zero faffing, from arrivals to waiting truck. The personal greeting, the seamless possession of our luggage, all the hidden infrastructure of luxury. The waiting transport- a mud splattered monster high wheel pickup-the first curved ball of the tour.

The Estancia itself stands proud on a cliff bluff some 150 feet above the Parana River. Built twenty years before by an enterprising rock star fishing guide it has the quiet confidence of knowing that both location and facilities are faultless. A dozen acres of manicured grounds, dotted with low native trees frame the vista of the river- a south American Mississippi wetland clone. The house is long and wide, a mix of old and young. High ceilings, cool tiles and marbles, old, polished wood, deep sofas and almost as many acres of public space inside as out. Beyond this is the young, refurbished Tardis. Spacious, well equipped modern rooms, quiet air conditioning humming, wet rooms with full baths and walk in showers, media centres and fast broadband. The foundations of personal comfort set solid.

There is a vital ratio that determines the effective placement of a front-line warrior into the field- that between the one of him and the many in logistics behind him. And so it was with us. We three sporting combatants were served by our team of thirteen. Our batmen were the bird boys- Gustavo, Caito and my own Carlitos. Paul James directed front of house, and led inside chef, outside chef, two waiting staff, two cleaning staff, two gardening staff and blessed Lorena our masseuse. Not one was supernumerary. What seemed an excessive initial show of force was stretched to its very limits by daily challenges to produce cold towels and beer, hot baths and food, relaxed muscles and laughter, clean laundry and clean starched sheets to fall into.

As with all the best military and luxury logistic teams there is a well-honed routine. This picks up the unsuspecting guest and cossets them in a velvet fur lined but steel backed glove. One may have the perception of free will but all is beautifully and comfortably predetermined. At Cortaderas one breakfasts at 0715. Free will allows tea or coffee; fresh juice or not; fresh fruit, and the choice of fried or scrambled. Predetermination ensures completion by 0752, enabling booting, suiting, sun screening and boarding the monster pick up at 0800 prompt. A forty-minute drive with choice or combination of banter or music sees one in the field. Reverse this trip at noon sharp, adding only a brief radio call to the house team as one approaches the drive to ensure uniformed maids await with cold towels as we clambered down from our high chariot. Then “no rush”, but somehow we are all assembled by 1252 for drinks and canapes. One large cold beer, it seems, will only take eight minutes to drink, and the stroll across the lawn to shaded table at cliff edge another two. So, by 13.02 each day guests and host sit under the trees, with the guests secure in the knowledge that free will has been exercised in that most pivotal and perfect task of all- the choice of wine for lunch.

Wine flows, conversation flows equally freely, and within sixty minutes three courses are served and shared. A last glass of malbec, the lawn stroll reversed, and forty minutes allow forty winks of solid nap. 1500 on the dot sees us pampered guests climbing back up into our high wheeled monster. And then, like a maverick child, free will breaks out from nannies guardianship. Departure from the shooting field can vary between 1800 and as late as 1845, dependent on banter, beers and tired shoulders. Upon arrival routine is re-established. Cold towels await, and Lorena offers pounding and stroking of battered muscles. Oil showered off, dusty, cordite reeking kit swapped for clean pressed laundry and bar awaits. Perched up on high stools the world is put to rights with rums and whiskeys, the warmup exercises for the main event. Supper lingers, the relaxed open-ended event of the day. Bottles are chosen, collected, and become the communal property of the table. Birds are remembered, claimed and boasted over. And then to bed, to quiet approving smiles of logistics crew whose routine has invisibly but ruthlessly imposed itself upon our day.

Our sporting endeavours are the very antithesis of this well-oiled machine. Here puerile chaos reigns, and we are gods. We have a daily choice as to our Elysian fields- whether to go wet or dry. If wet bobs, then the river allows our best Bond fantasies to play out. Live and Let Die re-runs at double speed as we plane from one favoured fishing spot to the next, pausing only to cast, or rebait our hooks. One cast in fifty, perhaps in a hundred brings a result. A hit to the line like a giant pulling one towards the water. Then Omar animates and comes alive. A screamed “Strike, strike” and exhortation to “Reel, reel” and mayhem floods the boat. A scramble for nets and gaffs as gold flashes skywards, our hooked fish somersaulting and pirouetting in efforts to break lines and break free. Often this works, and strained lines snap backwards towards frustrated fishermen. But not always, and eventually an acrobat is exhausted and plucked momentarily from their world to ours. The landing routine is swift. Dehooked, lifted by victor to arm’s length hold (beware the teeth that bite, these are jabberwocks), recorded for posterity by those less fortunate this time, then back to sanctity of river. All complete within ninety seconds or so, and before the conquered begins to gasp. A fair fight, a worthy opponent, and measured respect from the champion.

A day on the river is a short one. Bright light, both from sun above and waters reflection; no shade and seasons heat conspire to burn bodies and the reserves that fuel us. By noon we are done, fished out and glad to be back on shore where cold towels await. By contrast the shooting day can stretch on for several sessions. Shade, rest and resuscitation are dry bob luxuries not found on boats. Our forty-minute drive to shooting grounds takes us via dirt roads through fields and farms thick with doves devouring their hard earned crops. 35% of wheat, 45% of soya and 75% of the sunflower crops are lost to dove. We pass a fresh combined field of wheat and doves rise in a black cloud so thick we have to slow the car.

Each day brings a different stand. All have in common a flight line from roost to crop or vice versa. Early in the week we shoot the nursery slopes, Padbury style birds that David and AJ greet as approachable. I struggle with the unfamiliar, the sheer scale and weight of numbers. Think packs of grouse in late November, small black dots approaching rapidly from a short horizon and disappearing untouched just as rapidly. I suffer twice, first with target selection and acquisition and then with lead. After an hour and a slab of shells Omar takes pity. Close in I am ahead he tells me, try longer birds, they will be easier. And then it clicks and tiny travelling dots, less than half the size of grouse or partridge start falling at distance from the sky. Disengaging brain and relying on speed and instinct suddenly the pattern appears and joy kicks in. the whoops bring my fellow guns who have cowered at distance on their pegs, fearing my grumps. We shoot together, stealing each other’s birds and rotating the ambushes and ganging up. If you are not part of the plan you are the target.

As days pass the birds rise higher or rather we fall lower. Our favourites become the Hole and the Balcony- each looking out over high trees, big dips and far horizons. Each of these present two million birds plus to us each session. Shots and behaviour become more outrageous. We shoot in line abreast, now with music. Santana and Queen pumping out at volume, hips swinging as each shot is measured and matched to soundtrack beat. Shots become longer and higher, each trying to out do the other and earn a gasp from bird boy or in ultimate accolade from Omar himself. And when the birds can get no longer the calibres get smaller. We start with twenty, then twenty-eight, and finally the hills ring to the gentle “pop pop” of diminutive 4.10. We shoot till we bleed sweat and can stand and hold guns no longer. We shoot till we have no space to stand between the empty cases. By common consent we fall into field chairs and seek solace in shade and cold Quilmes. Respites are brief and as banter builds competitive urges overcome weariness. Bird boys leap too and stuffing and shooting recommences. Repeat with giggles until arms can lift no more and heads ring from recoil.

This truly was a privilege. All the gildings of luxury- fine wine, fine food and faultless service. And that extra spin that truly magnificent confident luxury offers- the scruffy, dusty, hot, sweaty, thorny days in the bush. No smart short cuts here, but days spent earning the joy we sought. A fig leaf of justification for our luxury maybe, or just a reversion to the scruffy urchins we once were, and still perhaps are, deep down inside. 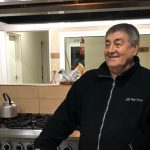 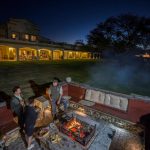